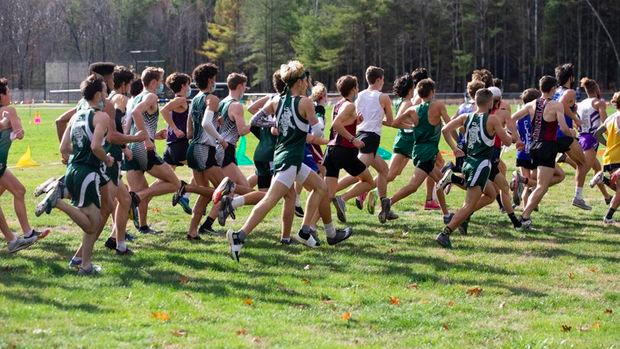 The Class A Championship Girl's race kicked things off with a bang. North Kingstown, Cumberland, and La Salle Academy were all vying for the team title. The favorite was North Kingstown after a stellar performance at the Ocean State Invite and surprised East Greenwich by beating them there. Today, however, muddy conditions meant that anything was possible, and right away a group consisting of La Salle's Caroline Cummings, Classical's Caroline Jankowich, and North Kingstown's Rory Sullivan, and Molly Sullivan broke away.

By 4k, Caroline Cummings had opened a lead on Rory Sullivan, but as they entered the football field, the lead quickly began to diminish. Caroline, a middle-distance specialist, put on her afterburners and secured the win in 18:47. Rory Sullivan settled for second in 18:48.2, and Caroline Jankowich placed 3rd just under 19 in 18:59. Filling out the rest of the first team all Class was top freshmen Molly Sullivan of North Kingstown, Keaney Bayha of Pilgrim, Kiley DeFusco of Cumberland, and Ruby Nunnery of North Kingstown all sub 20. In the team battle, La Salle upset North Kingstown for the team title 39-42. This was thanks to La Salle's 5 placing ahead of North Kingstown's 5. Cumberland settled for 3rd with 68 points. North Kingstown and La Salle Academy will face off again at States when they will both race against 2020 State runner-up East Greenwich in Class B.

In the Class A Boys race, four teams were all very capable of taking the team title. Cumberland looked to be the clear-cut favorites. They had beaten both La Salle and Hendricken at Great American. North Kingstown also looked ready as they had won the Wickham Invite. Early in the race, La Salle's 1-2 punch Adam Thibodeau and Jack Casey took the lead and did not relinquish it. They expanded a lead on Cumberland's Henry Dennen, as well as North Kingstown's Jackson Borge.

With 1k to go, Casey made a move on his teammate and never looked back. He followed in his father's footsteps, who also won Class A for Cumberland, and took the win in 15:50.6; the fastest time of the day. This was five seconds ahead of Adam in 15:55. Jackson Borge also broke 16 with a 15:57. Rounding out the top 7 was Troy Silvestri of Bishop Hendricken, Cole McCue of Cumberland, and Keegan Tierney of Bishop Hendricken. During the race, Cumberland's 3rd man John Walker was injured and could not finish. Jake Sullivan of North Kingstown also did not race. This hurt the two teams and saw them finish 3rd and 4th with 71 and 84 points. In the final 1k, Hendricken looked to be leading with six runners ahead of La Salle's 4. Phil Simas and Lachlan Bishop were able to pick off two runners the last kilometer, and David Parenteau held off two hard-charging runners from North Kingstown. This was the difference as La Salle won 37-42. The merge shows La Salle winning by just three points. Next week, with more athletes in the mix things, will be even closer between the rivals.

In the Class B Girls race, Reese Fahys ran from the front and dominated with a 17:54.4. Teammates Rylee Shunney and Ava Peters went 1-2-3 with a 9:08 and 19:12. In total, all seven of East Greenwich's runners broke 21:02. They easily took the team title with just 20 points. Even if the 6 and 7 runners were counted, they would have still won over South Kingstown's 65 points. Heading into states, East Greenwich looks to run with more competition for their 2 and 3 runners. In the merge, they lost by 11 to La Salle 70-59. With North Kingstown and La Salle Academy, this may lead to a similar result to 2019 when states were won by just one point on the girl's side.

In the Class B Boys race, Cooper Michaud looked to be the favorite, and he delivered. He stuck back early and made his move in the latter half for the win in 16:0705. He was followed by Antonio Capalbo of South Kingstown in 16:12, Jacob Connolly of East Greenwich in 16:14, and Kaden Kluth of Portsmouth in 16:20. Rounding out the top seven is Nicholas Martin of East Greenwich, Holden Vaughan of Barrington, and Nathan Evans of Lincoln all breaking 16:30. In the team battle, Lincoln took the victory scoring just 89 points and beating Chariho by 3 with 92. Cooper and other Class B individuals will surely mix it up next weekend in the finishing stages of the race.

In the Class C Girls race, Sophia Gorriaran came out and ran 19:01 for the win over Lucy Noris of BVP. Sophomores Eva Mermin of Moses Brown and Emmy Belvin finished 3rd and 4th just above 20 minutes. Moses Brown put 5 in the top 20 and dominated to a 42-91 win over The Prout School.

In the Class C Boys race, Devan Kipyego was the pre-race favorite by a lot and a favorite for the state title. He went on to win in 16:25.7, but he would have been able to go much faster if he had more competition. He was followed by Westerly's Jake Serra in 16:43 and strides ahead of Jason Padula of Smithfield in 16:46. His teammate Elijah Saddlemire placed 4th in 16:51. These two Sentinels helped put four in the top 13 and squealed out the team title over previous favorites Saint Raphael's 58-60. Though St. Ray's lost, they extended their Class Championship streak to 4 years with Devan's win. When states come around, I would not be surprised if Devan finds himself with Casey, Thibodeau, and Michaud the last few hundred meters.

Next week, La Salle looks to go back to back on both sides, but North Kingstown, East Greenwich, Bishop Hendricken, and Cumberland all look to stop this. Individually, All three Class champions on the boy's side could win, and the race will be won in the final few hundred meters. Reese looks to be the clear favorite for the girl's and she hopes to help her team win the state title. Next weekend's race is a must-see, and I for one will be there watching it all go down this Saturday, November 6th.