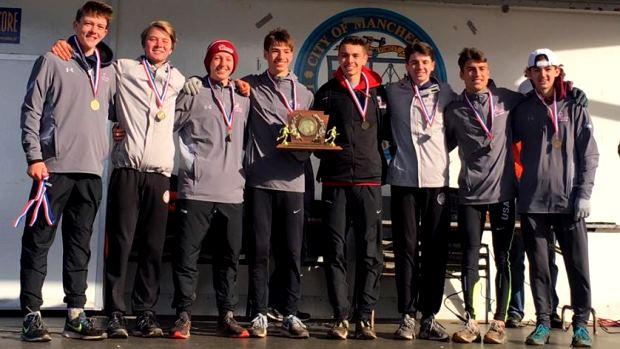 Turns out the Rams' near shocker over favored Hendricken at last week's State Meet was just a preview of better things to come.

With four of its runners among the first 14 placements, La Salle Academy pulled off a stunner at Saturday's New England Championships. The Rams returned the favor to their RI rival Hawks by winning the team title with a 49-80 victory at Derryfield Park (NH).

"After last week's (State Meet), we felt pretty confident we could give them a run for their money today," said La Salle coach Ken Skelly, whose team fell to the Hawks by a slim 30-35 score at the state championship. "We did think (winning a New England title) was something we could do."

A week after his fourth-place finish at the State Meet, sophomore Jack McLoughlin continued his mastery of the trails by placing third with a time of 16:02.1. Junior teammate Max DiMuccio was right behind in fourth at 16:08.5. Rounding out the Rams' scoring was Domenic Campagna (11th, 16:15.3). recent state titlist Joseph dos Reis (14th, 16:24.0) and Alexander Maxwell (32nd, 16:39.3). It was the fourth New England title for the Rams in the last six years. From 2013-16, La Salle won three straight.

As for McLoughlin, he has been coming on strong late in the season. In addition to his top finish at states, he was also sixth at the Class A meet on Oct. 28. Skelly could sense things were looking up for the promising sophomore this fall after he went sub 13 minutes at last month's Manhattan Invitational where he was timed in 12:53 for the 4K course.

"We realized then that the workouts would have to pick up," he said. "He definitely has improved by leaps and bounds, more than I expected. Once he ran at the class and state meets, he became more and more confident. I am still blown away by how much he has improved."

In the girls' competition, La Salle was the top finisher from the Ocean State, taking second overall with 149 points. Champlain Valley (VT) took team honors, scoring 78 points.  Recent state champion Elizabeth Sullivan of Portsmouth was the first across the line for RI, placing ninth overall in 19:06.0. La Salle's Kaylie Armitage was tenth in 19:10.6. The Rams' McKenzie Doyle secured 20th with a 19:22.7 clocking.