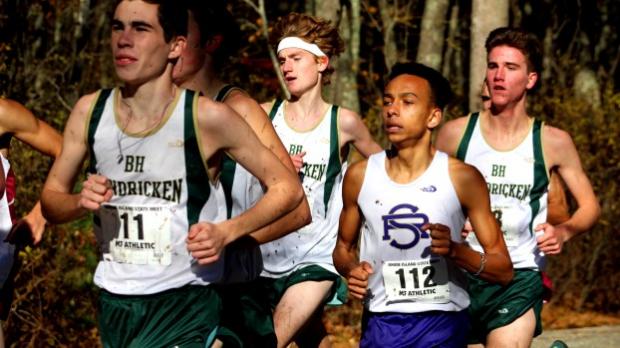 Based on how it ran throughout the season and its' dominating performance at last week's Class A Championships, most onlookers figured Bishop Hendricken would breeze to its second straight team title at Sunday's RI State Meet.

Most, that is, except Hawk coach Jim Doyle and heated rival La Salle Academy to name a few.

Hendricken was able to pull out the victory on Ponaganset's covered-bridge trail. But it certainly didn't come easy. Just five points separated the two squads on a perfect day for racing as Hendricken hung on to a too-close-for-comfort 30-35 decision over the second-place Rams. Classical finished third with 161 points.

With his patented kick over the final 400 meters, La Salle's Joseph dos Reis won the individual title with a winning time of 15:38.26. The Hawks' Jack McMahon finished as the runner-up for the second straight year with a time of 15:40.54. From there, the Hawks did what they do best by bunching its next four runners among the top nine placements to earn the school its 24th state crown since 1978. The gap between its No. 1 and No. 5 runners was less than 24 seconds!

In the girls' race, Portsmouth made it back-to-back titles, defeating runner-up Barrington, 55-95. South Kingstown was third with 99. La Salle was fourth with 101.

The Patriots all but solidified the win by placing their top three runners among the first six finishers. Spearheading the victory was an individual triumph from Elizabeth Sullivan. The senior standout ran neck-and-neck with teammate Nikki Merrill for the first half of the race and took charge shortly after, crossing the line with a time of 18:40.79. Merrill secured fifth (19:15.60) and Olive Allen took sixth (19:23.6) for Portsmouth. Rounding out the scoring was Abby Gilpin (17th, 20:03.37) and Sabrina Leary (29th, 20:34.91).