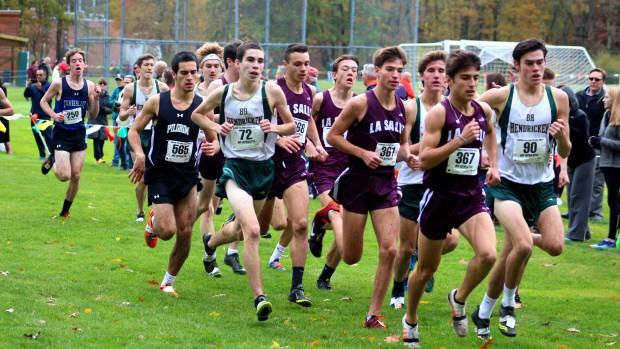 It didn't matter for Bishop Hendricken at Sunday's Class Championship. The Hawks once again did what they do best and simply dominated on Ponaganset' covered-bridge trails.

With an individual triumph by Aidan Tierney and a gap of just 20 seconds between its' No. 1 and No. 5 runner, Hendricken won its 31st Class A title with an impressive 19 points. La Salle took the runner-up spot with 41 points.

In the Class A girls' race, a sixth runner determined the outcome as North Kingstown posted an upset of favored La Salle. Both teams scored 46 points. The Skippers' Olivia Joy proved to be the deciding factor with her 14th place finish.

La Salle sophomore Kaylie Armitage and teammate MacKenzie Doyle went 1-2 to give the Rams an early edge. Armitage, a transfer from Exeter/West Greenwich, covered the 5K layout in 19:06.40. Doyle was timed in 19:10.05. Haley Oliver, a freshman from Coventry, was third overall in 19:39.50.

Connor Murphy led Classical to the team crown in the Class B meet. Murphy broke the tape in 16:18.67. Finishing second was Burrillville Andrew McClure in 16:25.43. Classical's Joe O'Rourke was third with a time of 16:31.35. The Purple defeated second-place Westerly, 62-85.

Portsmouth won the girls' Class B title, scoring just 27 points. East Greenwich was second with 72. The Patriots all but solidified its second straight crown with a 1-2-4 finish. Senior Elizabeth Sullivan clocked the fastest time of the day with a winning effort of 18:52.49. Nikki Merrill was second at 19:16.33. Taking fourth was Olive Allen with a time of 19:34.03. East Greenwich's Leah Grace broke up the Portsmouth party by placing third (19:19.46).