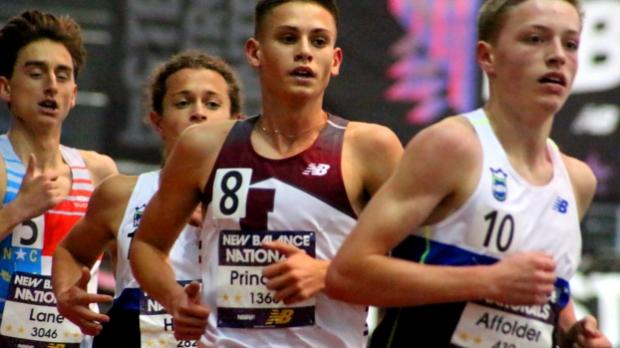 Prior to Sunday's two-mile run at the New Balance Nationals, La Salle Academy's DJ Principe talked with fellow competitor Noah Affolder about not holding back and making the race an honest one from start to finish.

The two competitors, along with Brody Hastey, held true to their pact. There was certainly no holding back in this one! In an epic battle to the finish, Hasty, a Brentwood, Tn., junior, was able to break away the final 100 meters to win with a nation No. 1 of 8 minutes, 45.16 seconds. Affolder, a senior from Carlisle, Pa., was second in 8:46.09,. Principe was third with a new state mark of 8:47.20, smashing his old record of 8:59.09 from last year's New England Championships.

The trio passed through the opening mile in 4:20 and broke from the pack shortly after, setting up their classic duel to the finish line.

Rhode Island athletes had three more All-American finishers. Ponaganset's Gianna Rao was second in the girls' weight (59-7.75), while Woonsocket's Jared Briere was fifth (74-0.5) in the boys' competition. Central was sixth in the 4x200m relay (1:31.72).