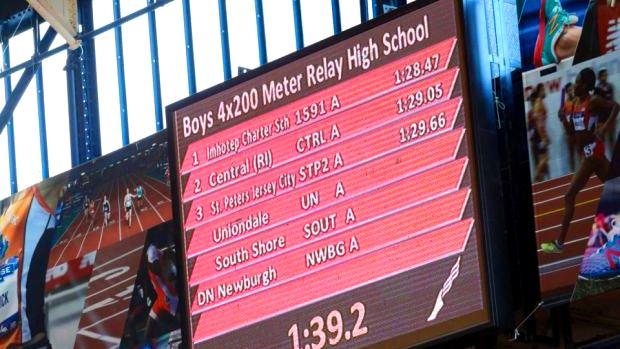 There's a reason Central High was a little quiet at the Class Championships on Saturday.

It's because four of its key members were down in New York City breaking a 10-year-old record.

Matched against some of the top teams in the country at the Armory Track Invitational, the Knights broke the state mark for the 4x200-meter relay by finishing an impressive second overall. The foursome of Donatien Djero, Austin Wolo, Dametrius O'Connor and Anthony Vega combined for a time of 1 minute, 29.05 seconds. That time broke the 2007 record of 1:29.72, set by Hope at the Eastern State Championships, which was also at The Armory.

The race was won by Imhotep Institute Charter with a time of 1:28.47. The Pennsylvania school currently ranks No. 1 in the country with its best of 1:27.55 from the New Balance Games last month. Central moved up to No. 6 in the rankings.

The NY meet also featured victories in the weight throw events by two of our Rhode Islanders. Woonsocket's Jared Briere won the boys' competition with a heave of 70 feet, 4.5 inches. In the girls' event, Ponaganset's Gianna Rao was first with a distance of 55-11.