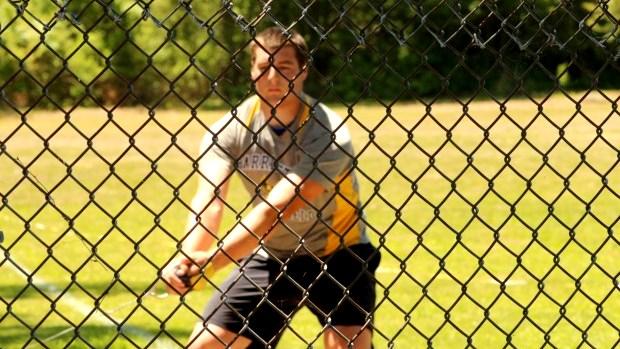 The season is not over yet!

For our top-level and elite athletes, the high school outdoor track & field campaign comes to a close this weekend in Greensboro, N.C., at the New Balance Nationals Outdoor Championships.

Rhode Island has generally sent a strong contingent to the nationals, but this could be one of its best. Several of our athletes have a chance to make it to the podium with a few capable of bringing home gold in the three-day meet (June 19-21), held at North Carolina A&T University Stadium.

The potential is high for that to happen in the hammer where the Ocean State owns the top three positions in the country. Barrington junior Bobby Colantonio has the top throw in the country with a toss of 243 feet, 7 inches. Senior teammate Adam Kelly is right behind at No. 2 with a heave of 236-7 and Moses Brown senior Owen Russell holds the third position with his best of 222-3.

It could be battle between the two Eagle standouts, who both have some momentum entering the meet. Colantonio defeated Kelly at the state meet where he claimed his second straight individual title. Kelly is coming off a victory at the Caribbean Invitational in Cuba where he tossed a meet record of 222-1.75

Classical’s Alva Hicks should excel in the throwing events. She’s entered in the discus, shot put and hammer. She ranks No. 6 nationwide in the hammer with a 171-5 to her credit. Smithfield’s Meagan Malloy, a difference-maker for the eventual state champion Sentinels with her victory in the hammer, also has a chance for a big performance this weekend. She achieved her PB at the states with a toss of 168-9, a distance that ranks her No. 8 in the country

On Friday night, the first of the individual championship running events will take place with the 5,000-meter run, scheduled for a late 9:10 start. On both the boys’ and girls’ side, the respective state records could be in jeopardy. 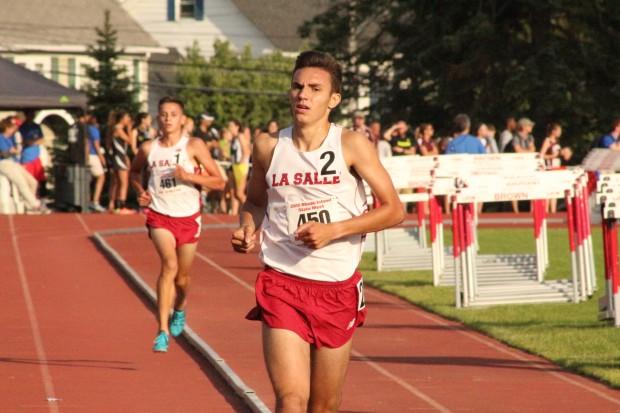 La Salle sophomore D.J. Principe will be among the field in the boys’ race. He’ll be chasing the current mark of 14 minutes, 56.46 seconds set by former Westerly great Andrew Springer at the 2007 nationals.

“It’s definitely attainable. He’s in good shape,” Myers said. “After his nine minutes at the Loucks Games, I think he’s got a chance at the record. We are going to talk about splits before the race. Seventy seconds a lap will get him around 14:35. If he can do that, and just hang tough that last mile, I think he can get the record.” 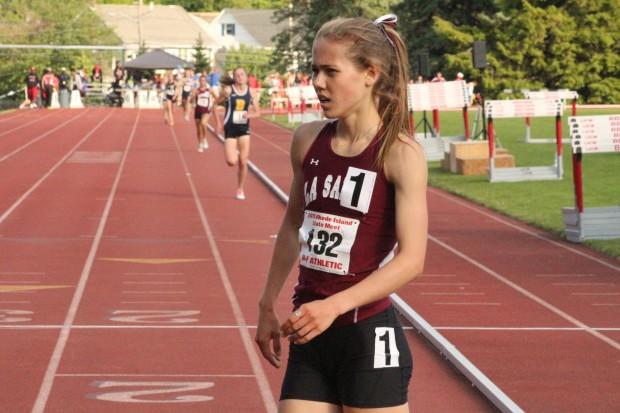 La Salle senior Sheridan Wilbur, the recent 3K state champion, is hoping for success in the girls’ 5,000m. Wilbur has proven that the longer the race the better her chances for prosperity. At the state championship, she became only the third person in the meet’s history to crack 10 minutes with her winning time of 9:56.54. Wilbur also finished second in the 1,500m at the states where she crossed the line with an all-time best of 4:33.24.

The La Salle runner will be looking to dip under the two-year-old record of 17:31.20 by former Westerly standout Jackie Burr at NBNO.

“Sheridan really wanted to run the 5K before she graduated,” said Ram distance coach Kelly Martin. “It’s Friday night, she wants to see what she can do. Right now we are setting her up to get low 17 (minutes). I think she can do it. If we can get her under 17 minutes that would be fantastic.”

Wilbur will be back on the track on Sunday where she’ll join teammates Karina Tavares, Eliza Rego and freshman Emily Kane in the 4xMile relay. Tavares, Rego and Wilbur were all part of the Rams’ indoor national championship squad.

Martin states that the NBNO race will be a bit more competitive then what her quartet experienced at The Armory back in March with several gifted squads from the western part of the country making the trek.

“I quickly glanced over the list and there were a lot of states that don’t run indoor that can compete at a high level,” Martin said. “If we run our best times and perform the way were are capable of, we can compete with these type of teams.”

The X-factor for the Rams could be their talented ninth grader Kane. Rego and Wilbur are capable of running in the low 4:50s and Tavares is also a sub five-minute miler. Their newest addition came on strong this outdoor season and ran a best of 4:48.80 for the 1,500m, a time that placed her second at the Mount Pleasant Invitational last month.

“She is our next fastest person,” Martin said. “We are trusting a freshman with our fourth leg. The one thing I like about freshman is they don’t know any better. They don’t know what they are doing. She believes she can do it. She’s going to be a great runner.”

Martin is looking for a time in the low 20-minute range from her quartet. 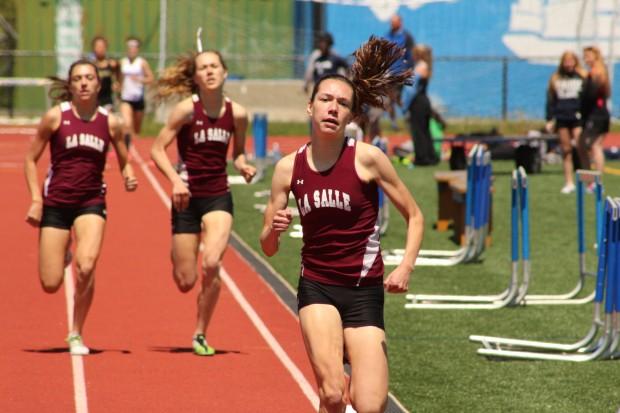 Rego is also entered in the two mile. Even though she ranks higher nationally in the mile, the longer race still should suit her just fine. The La Salle star has a best of 10:28 for 3,200m, which she did at the Loucks Game last year.

“The reason behind her doing the two mile is the mile is on Sunday, the same day as the 4xMile,” Matin said. “The mile is kind of one of those events with elite athletes where you have to be at your best. We decided the (two mile) would be a better fit.”

In the boys’ two mile, the La Salle tandem of Jack Salisbury and Matt Bouthillette could do some damage. Both will be aiming for a sub nine-minute clocking, a time that could certainly place the juniors on the podium.

“I think they can break nine minutes,” Myers said. “They just want to be competitive and stay with the lead pack. Hopefully they’ll feel good and just go for it. Anything is possible. I bet four or five guys will break nine minutes.” 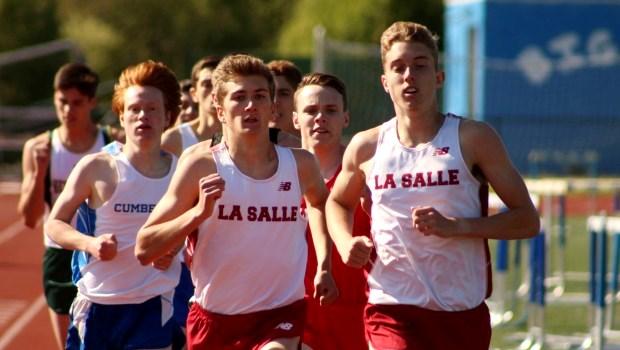 Salisbury, of course, has the speed to make things happen for the eight-lapper. He finished third in the elite HS mile at the Prefontaine Classic in Oregon last month where he ran a two-second best of 4:06.76. He’s coming off a moderately disappointing race this past weekend at the adidas Dream Mile in New York where he finished last in the field of 12 with a 4:23.

Myers is confident his star runner will bounce back in N.C.

“He’s ready,” he said. “He just didn’t have it (at the Dream Mile). I just told him he just has to regroup and get back on the horse. He’ll bounce back.”

One event the Rams will not be competing in at NBNO is the 4xMile, a race they captured this past winter at the indoor nationals.

“We looked at the schedule and the two mile is at 7 (on Saturday night) and the 4xMile is Sunday morning,” Myers said. “There’s not a lot of time to prepare. We’ll just race for individual glory.”

Last, but certainly not least, is Hope’s Quashira McIntosh, who will be closing out her celebrated high school career at NBNO. McIntosh, a multiple state champion and record-holder, has had her share of top performances at national-level meets. The one thing that has eluded her is a podium finish in the sprint events at the nationals, which always attracts a mega-talented field.

This weekend that drought should end. Individually, McIntosh is entered in just the 200m. That is her specialty and this past Saturday in particular she proved that she could be a factor in the short sprint. She captured the New England crown with a wind-aided time of 23.64, a clocking that put her mere strides from a fast-closing Kate Hall of Lake Region (ME).

If “Q” can run a similar race like she did up in Maine, good things should follow. She will also run the anchor for the Blue Wave’s Sprint Medley Swedish Relay and 4x100m Relay. 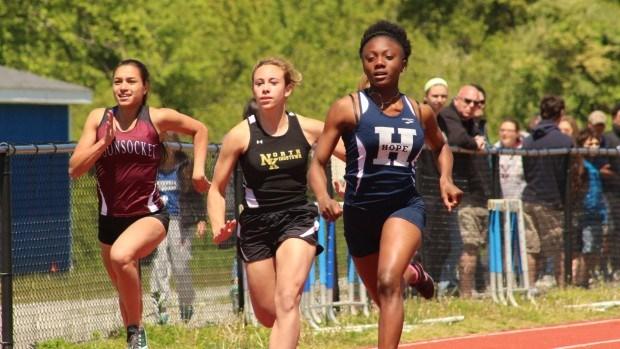