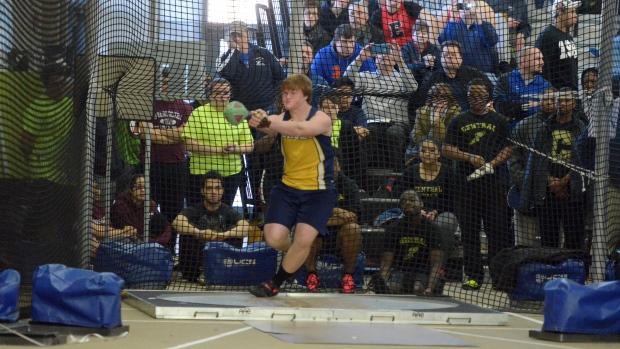 Throughout the week, RI MileSplit will feature some of the top athletes that will be competing at the New Balance National Indoor Championships (March 13-15)

It seems only appropriate to begin our Eye on NBNI series with a defending champion. After winning his first national title in the 25-pound weight last year, Adam has continued his supremacy behind the cage this winter where he has been ranked No. 1 since the start of the season and is the only thrower to crack 80 feet with his all-time best of 83 feet, 3.25 inches.

It's been all about consistency for this Eagle standout, who is undefeatedin the weight and has thrown further than 80 feet eight times this season. Adam has performed well in all the big meets with victories at the Millrose Games, Dartmouth Relays and Yale Track Classic. It should be no different at NBNI.

Again his top competition will be his teammate, junior Bobby Colantonio, who recently won the New England Throwers Championship, a meet that Kelly was not entered. Colantonio owns a best of 79-9, which is ranked No. 2 nationally. This is an event that R.I. could dominate the podium. Moses Brown senior Owen Russell has the third best distance in the country with his best of 75-8.25.