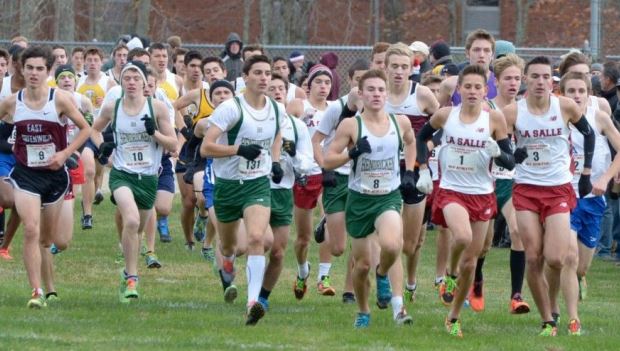 There was one thing going through Ken Skelly’s mind as the La Salle Academy coach looked out his window and saw rainy and windy conditions on his ride to Sunday’s state cross-country meet.

“On the way here,” he said, “we were driving up and I was saying, ‘It’s ugly weather, but let’s hope it’s a beautiful day.’” 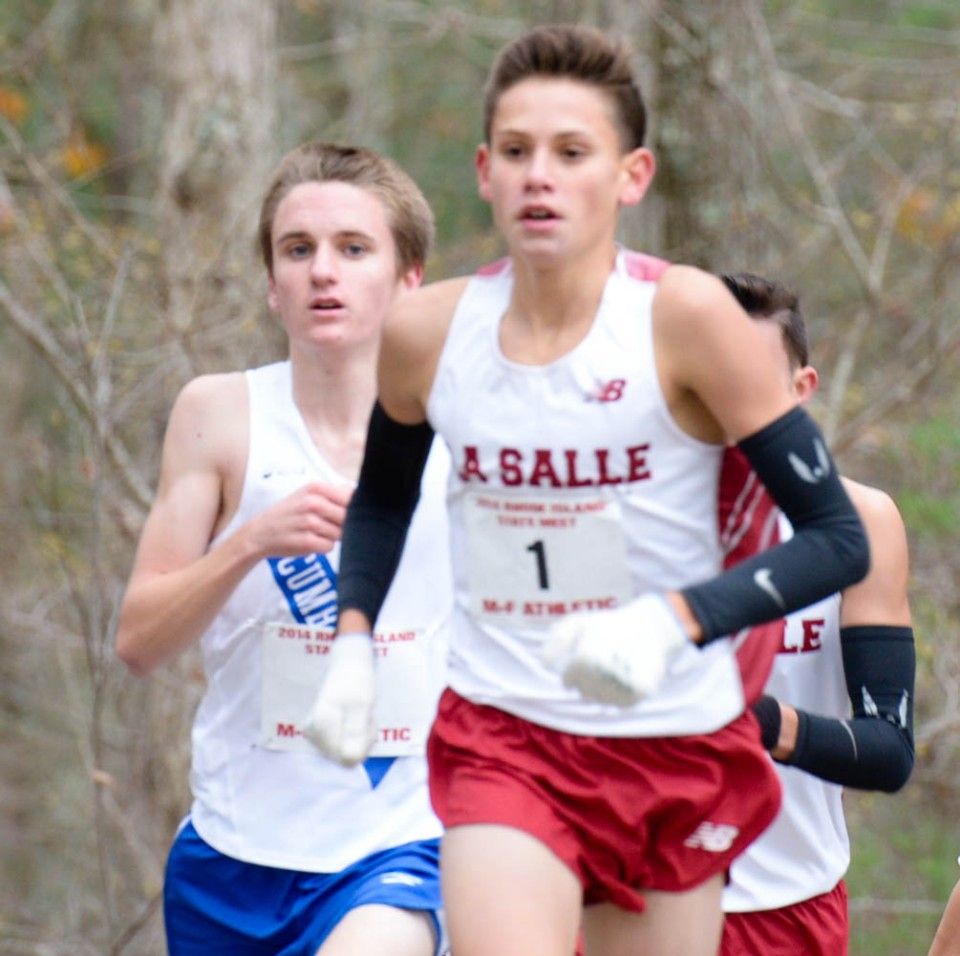 Under less-than-ideal conditions at Ponaganset, La Salle won its first state title since 1983 with an very-impressive 25-43 victory over defending champion Bishop Hendricken. It was long overdue for the Rams, especially recently. Since 2007, La Salle finished as a runner-up five times with three of those second-place finishes coming against the Hawks, including last year’s heartbreaking five-point loss.

“It’s a long time coming,” Skelly said. “Going back to 2007, we lost to Hendricken by two points.  Last year it was only five points. This year, to be able to tilt the scales in our favor and win the championship for the school, the community, for the families and friends, and especially for themselves, it’s a great day.”

Sophomore D.J. Principe captured individual honors and his remaining teammates occupied six of the next 10 positions to solidify the victory for the Rams. Principe, the top-ranked runner all season long, left no doubt a victory was on his mind, taking control of the front-runner position before he reached a quarter mile on the Chieftains' covered-bridge trail. He crossed the line with a winning time of 15 minutes, 37.17 seconds.

The gifted harrier, who became the first tenth-grader to cop a state title since Cumberland’s Jerry Bonner accomplished the feat in 1997, blazed the opening mile at sub 4:50.

“I was kind of boxed in a little bit. Once it opened up, once it got on the dirt at the baseball field I was able to get out in front and from there it was push, push, push. Every turn I put a surge in, every straightaway I put a surge in and it worked out really well,” he said. “The plan was to be fast. I wanted to hammer it and see what everyone else had; just break everyone down and the last mile, if anyone was there, out-grind them.”

Principe didn’t have to worry about anyone in the late stages of the race. He finished a comfortable 14-seconds ahead of Hendricken senior Tom Grizzetti, who placed second with a time of 15:51.21. 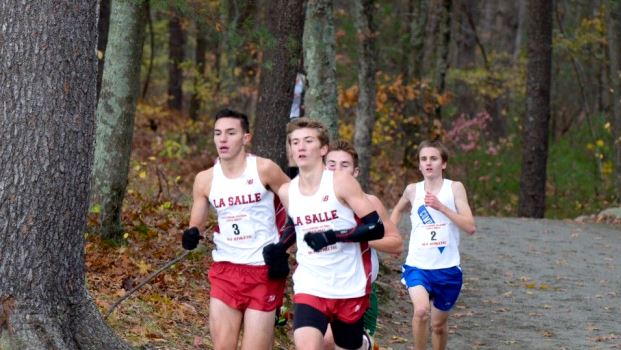 “D.J., there is no fear in that kid whatsoever,” Skelly said. “It shows you what it takes to be a state champion. You have to have that little edge. He was just dominant today. He took it from the first 200 meters and he owned it. He ran it all the way through and did a great job. He was outstanding. I was very impressed by him. To have his teammates come in and get seven placements in the top 11, that’s impressive, one of the best team there is. I am very excited for the guys today.”

The Maroon and White, ranked No. 11 on MileSplit’s national rankings, had equally-impressive efforts from senior Dan Paiva and junior Matt Bouthillette, who finished third and fourth with times of 15:55.44 and 16:00.28, respectively.

“Dan Paiva had the race of his life,” Skelly noted. “He was outstanding. No question about it that was the key to setting that moment for the guys to realize let’s go get it.”

The finish of Salisbury, who was the fifth man for the Rams on Sunday, should certainly not go unnoticed. It was his first race since the season-opening Injury Fund Carnival at the beginning of September. The multiple all-stater, who was second at last year’s state meet, has been recovering from a quadriceps injury.

“I just wanted to come in and see what I could do for the team. I didn’t really have a goal time. I didn’t really know exactly where I was,” he said. “It [quad] actually felt fine. I have been running for about two weeks now…It pretty much felt good. I wouldn’t have raced this if it was hurting. I did a couple of workouts this week and felt good.”

Skelly was impressed by his star runner, who was the preseason pick to win 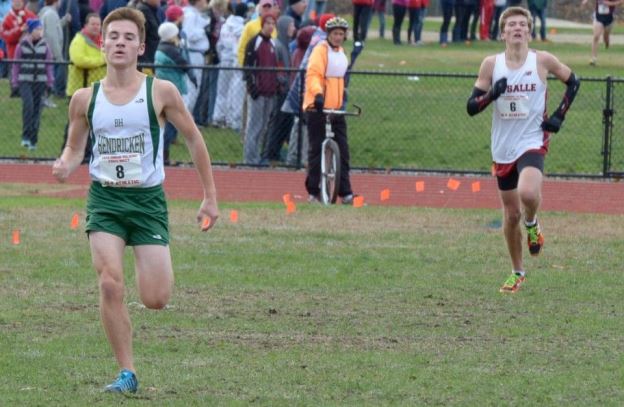 “That was a testament to who he was as a person,” he said. “He has the mentality that it’s the team first. He did an outstanding job, today. He really contributed. He ended up being a great factor in the win today.”

“That just shows what kind of runner Jack is,” Principe added. “Jack is a tough kid and all he does is grind. I know, him healthy, he would have been up with me, no doubt in my mind. I am not sure he realizes how big he was today.”

Hendricken’s performance certainly shouldn’t go unnoticed. In most other years, the Hawks’ point total would easily win a state title. The defending state champions had five of their scoring runners among the first 15. In addition to Grizzetti, a sixth-place finisher at last year’s states, Hendricken also had a strong finish from junior Dominic Parlato, who was fifth in 16:02.34.

Junior Sean Laverty of Cumberland (sixth, 16:03.17) and East Greenwich senior Noah Barreto (seventh, 16:15.34) were the only runners without a Hawk or Ram singlet that finished in the top 15.

In the team competition, East Greenwich was an impressive third overall with 102 points. Cumberland beat Barrington in a tie-breaker for fourth with both squads compiling 129 points. Finishing sixth and earning the last spot for this weekend’s New England Championships at Connecticut’s Wickham Park was Chariho Regional with 168 points.