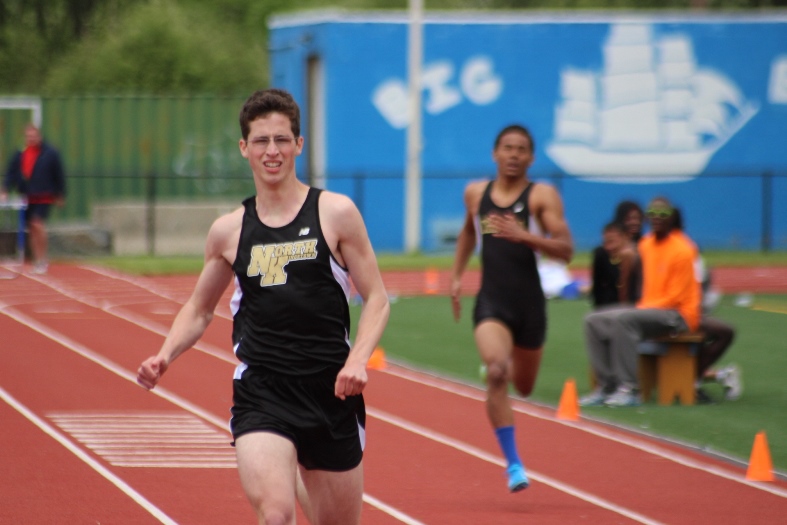 It’s no secret that this year’s boys’ state championship has the potential to match 2013 where East Providence won a tight battle over Bishop Hendricken and North Kingstown with a final tally that was separated by a mere five points.

Those three teams and a very talented La Salle squad, all contenders for the June 7 states, were at Tucker Field Saturday for the Class A Championships. Even though the Hawks won their 37th consecutive title dating back to 1978 with their 109.5-98.5 decision over the runner-up Skippers, no one was fooled by what’s in store in less than two weeks where every point will be crucial in order to hoist the trophy at the end.

“We can win it, but so can Hendricken, so can La Salle, so can Classical,” said Skipper coach Charlie Breagy, whose team is being pegged as the favorite inside Brown Stadium. “Last week (at the Classical Classic) we had two guys jumping 13 feet in the pole vault and this week jumping 12 (feet). If it’s a ‘12’ day, then we are in trouble. If it’s a ‘13’ day, things are good. If the high jump goes well for us at the states, that will be great. We need good luck…In the end, it will be what happens on the day.”

In their triumph, the Hawks had a double-winning effort from junior Lee Moses, who captured the 100-meter dash with a personal-best, hand-held time of 10.70 seconds. He also took the long jump with a distance of 21 feet, 3.5 inches. Additionally, he was fifth in the 200m at 22.60 and ran a leg on his team’s second-place 4x100m relay that combined for a time of 43.60, just .10 behind Central. 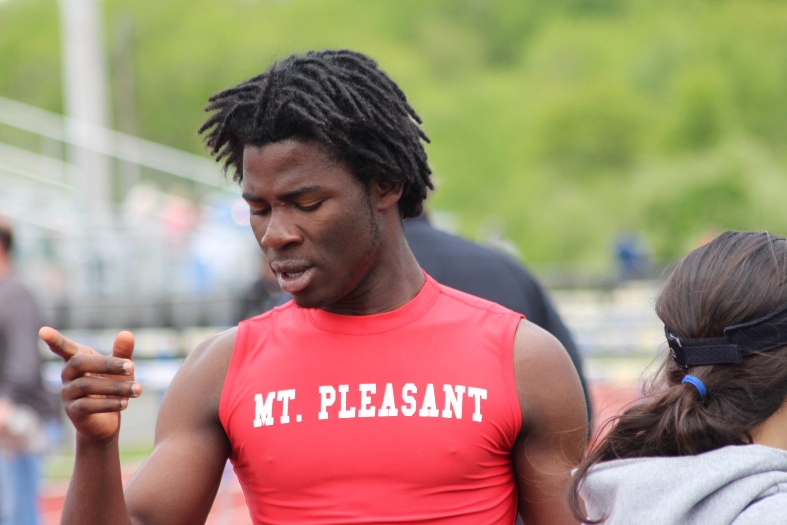 Moses was pushed to the limit in the 100m by the Mount Pleasant tandem of junior Trevane Clarke (second, 10.80) and senior Rodolph Zleh (third, 10.90). Clarke came back later and held off Central’s Moses Fofana in the 200m with both timed in 21.80.

Part of Moses’s motivation to excel is knowing that how he performs can make a difference as to whether Hendricken wins the team crown or not.

“It actually helps,” he said. “Sometimes it puts pressure on me. Sometimes coach will come up to me and say we are down in the meet and I’m thinking I got to do this and I got to do that. But sometimes it just helps me because going into a race, I am like, “Alright, my team needs these points so I got to do my best in this race.”

Senior teammates Colin Tierney and Alex Cerbo as well as sophomore Shane Olson joined Moses as victors for the afternoon. Tierney had a gun-to-wire triumph in the 3,000m where he was timed in 8:42.80. Cerbo was first in the shot put with a heave of 51-10. Olson led a 1-2 finish in the javelin with a throw of 154-11.

The Hawks, who placed in 11 of the 19 events, had a number of key performances in the nearly four-hour meet. Doyle noted the effort of freshmen Justin Mazzulla, who finished third in the triple jump (40-7.75) and also ran one of the fastest legs on the second-place 4x400m relay squad (3:28.60). Junior Ben Murphy was second in the high jump (6-2) and senior Chris Celona placed third in the hammer (179-3).

Well aware of the level of competition from all over the state, Doyle knows winning a state title for the first time since 2010 will not be easy. He looks at the Rams and Skippers as the two leaders.

“I think La Salle and North Kingstown are in it for the team title,” he said. “Things would have to go great for us and a little off for them for us to win it. Both of those teams have more than 10 points than we do. Their points today will hold up ours. It will be tough for us to pull it off.” 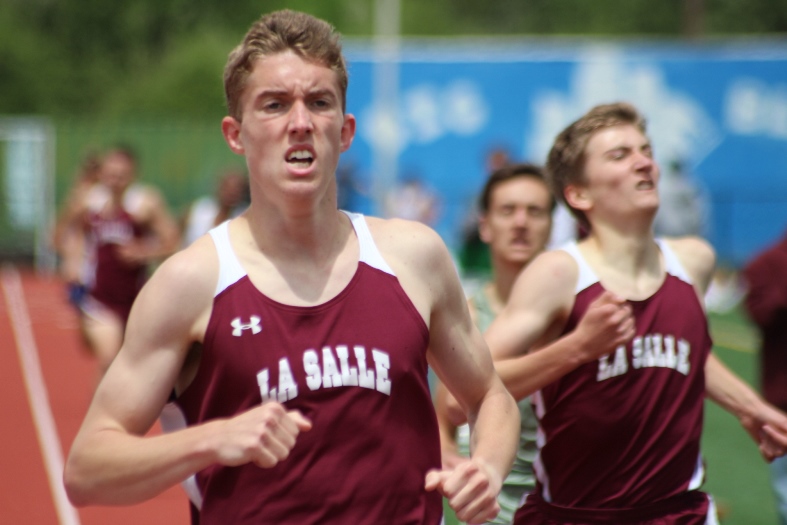 “We wanted to perform at a certain level in the events that we were in and I think we accomplished that today,” said La Salle coach Vin McGinn, whose team also had a first-place effort from senior Sean Greene in the high jump (6-6). “I think Bishop Hendricken had a fantastic day. North Kingstown has to be the favorite going into the state meet but I like how all our runners performed.”

North Kingstown had three individual champions. As expected, senior Zachery Emrich won the 400m convincingly with a near meet-record of 48.70. Jose Santos, a junior from Coventry, was second at 50.60.

“Today, I was just going for it. I wasn’t going for any specific time,” said Emrich, the defending state titlists in the 400m and the 800m. “I felt good. I was a little tired. I had like a little ankle issue, but it was good today.”

“I knew there was going to be a battle from the start so I went out there and just stuck in the pack,” he said. “I just tried to hold onto (Astacio). The last 100 I just saw him (start to slow down) so I just out-kicked him.” 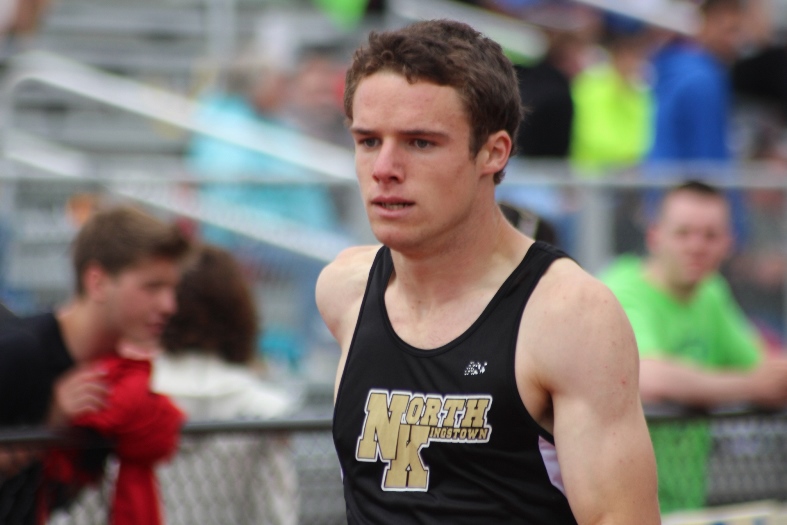 The Rams’ Greene, the indoor high-jump champion, matched his best in the vertical leap. He’s tied with Class B winner Jacob Reilly of Middletown with the top jump in the state. Greene cleared his opening height of 6-2 on his first attempt and also made 6-4 on his initial try.

“I am trying to get that 6-8 mark and I’d love to get 6-10 at the states,” he said. “I am just training hard. The season has been going good. I have been training really well. It looks good.”

Classical’s Abdul-Lateef Orulebaja earned three triumphs, taking gold in the 110m hurdles and the 300m hurdles and also winning the triple jump. Teammate Tom Vadis was a double victor with first-place efforts in the discus and shot put.