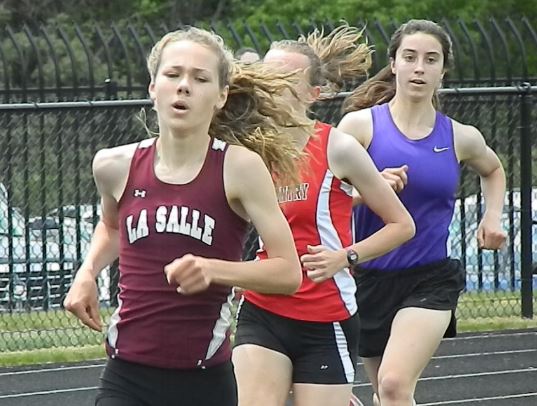 For most high school girls, running the 1,500-meter run in the low 4:40s and the 800 at sub 2:20 with two weeks remaining until the state championship usually means you’re in peak form for some optimum performances on track & field’s biggest stage.

Classical High junior Maddy Berkson is unlike most high school girls. In fact, she is among a select few that each time she steps on the track oval there’s always the opportunity for something special.

That was something that was often witnessed over the winter season, one where she accomplished a rarity at the indoor state meet on Feb. 16 by winning the three longest events (1,000, 1,500, 3,000) to lead her team to a share of the state crown with La Salle Academy. Less than a month later, after capturing her second straight New England title in the 1,000, she smashed an already impressive state mark in the 800 (2:08.46) by finishing third at the New Balance National Indoor Championships in N.Y., with an outstanding 2:06.67 effort. 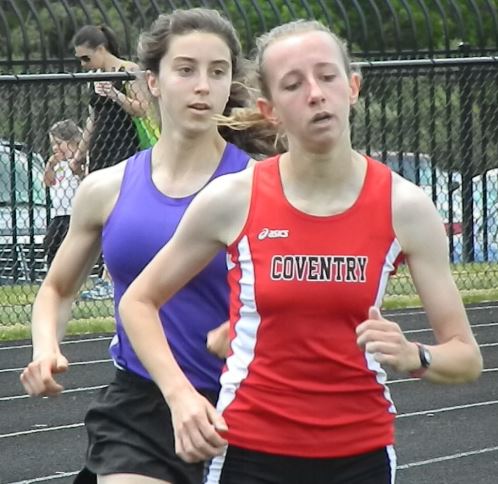 Standing on the infield of Cumberland’s Tucker Field at the conclusion of the Class A Championship on May 18, Berkson talked about her current outdoor season. The gifted junior had just run the anchor leg on her school’s first-place 4x400 relay squad. During the course of the meet, Berkson fell short in winning the 1,500, placing second to La Salle sophomore Sheridan Wilbur with a time of 4:43.3. She came back and took third in the 800, running 2:17.7.

Two weeks earlier at South Kingstown’s Curtis Corner Middle School, the Classical runner looked well on her way to a victory in the 3K at the Rick Schomp Invitational, but suddenly found herself unable to match the speed of freshman Emma McMillian of Barrington the closing laps and settled for second, more than 40 seconds off her personal best.

Her times from the 800 to the 3,000 this spring are all listed among the top five in the state, but for Berkson they are far from her best. Finishing outside of first place is also an unfamiliar sight.

But the Classical standout is not worried about the June 1 state championship at Brown Stadium, a meet where she set a state record of 4:27.92 to win the 1,500 in 2012.

“This kind of always happens in the outdoor season,” Berkson said. “I have a pretty good indoor season and I have to start kind of from phase one. Each season I go from phase one, phase two, phase three and phase four. I kind of have to start over and kind of start from scratch. (In outdoor track) it’s kind of a rough beginning, always. And there’s a lot of testing, like AP testing, I have SATs, it’s been a rough beginning of the season.”

In addition to her heavy load academically – she’s an ‘A’ student in mostly AP courses - Berkson feels some of what she is experiencing right now is the result of an intense season on the indoor surface this past winter.

“I think I went a little too hard during the indoor season, especially in terms of training,” she said. “A lot of my easy days were too hard, so I was like doing three workouts a week and four easy days. I just felt good all the time so I just kept going faster and doing more and I think that is catching up to me now.” 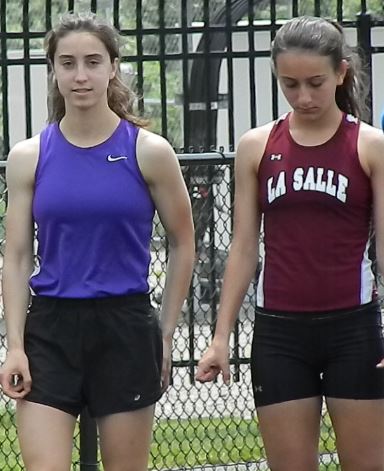 strides behind Wilbur for most of the race, but couldn’t match the kick of the talented tenth-grader the final 200 meters and lost by two seconds.

“I know the La Salle girls are in pretty good shape now so I figured they would have a pretty good time and try to take it out fast. I would just stay behind her and stay as close to her as possible, which worked,” she said. “With 200 (meters) to go I thought I had her but I was not anticipating that she would have that big of a kick. That was a little surprising, but I guess she was going pretty easy the rest of the race.”

In the 800, a race won by Barrington junior Abby Livingston in a meet record of 2:13.3, Berkson was just trying to improve on her season best of 2:21.20 from the Central Division Championship on May 7.

“I was just looking to improve my seed time,” she said. “I thought I might be on the bubble for qualifying for the states (in the seeded heat). I was pleased with the time. I was just going for even splits.”

“I am kind of backing off and reducing my mileage and that seems to be working,” she said. “I think I am beginning to get into the spring of things. I am not exactly where I would like to be or where I was imagining at this point, but I think I should be fine come the important meets.”

Those important meets include the state championship and the New Balance National Outdoor Championship in mid-June. At the states, Berkson is focusing on just two individual events.

As always, despite a season that hasn’t quite gone like she expected, Berkson is aiming for a first-place medal (or two) to wrap around her neck.